Creating history, not just preserving it.

In October 2009, the 200th Anniversary of the “Homecoming,” the return of Anthony Wayne’s bones to Waynesborough and re-burial in Old St. David’s churchyard, a 3-day event acknowledging that event took place at both historic sites. Anthony Wayne died in Presque Isle (now Erie, PA) on December 15, 1796 and was buried there. Thirteen years later his son Isaac removed his bones for reburial in Old St. David’s churchyard in St. Davids, Radnor Township, Pennsylvania. The 1st, 5th and 11th Pennsylvania reenactors, and a detachment from the Legion Ville Historical Society, escorted the “bones” to Historic Waynesborough on October 23, 2009. 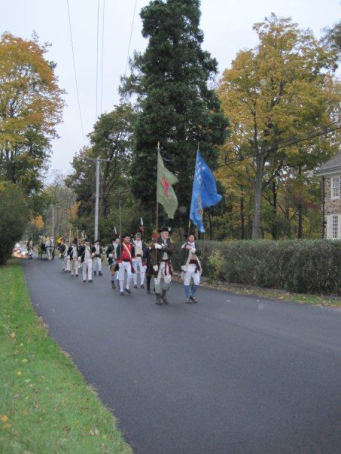 Standing guard in the House

This entry was posted on May 7, 2013 by Graphica in Anthony Wayne, Events, Wayne's Bones Return Home and tagged Anthony Wayne, Historic Waynesborough.